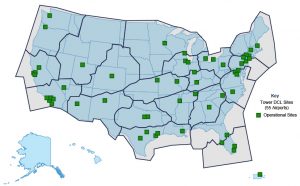 The FAA began testing Data Comm capabilities and benefits in 2014 at Newark and Memphis with UPS, FedEx and United Airlines, as well as select international operators. The FAA started deploying Data Comm in air traffic control towers in the fall of 2015.  The technology will be installed in air traffic control facilities that manage high altitude traffic beginning in 2019.

Data Comm is now operational at the 55 air traffic control towers listed below. Its rollout is under budget and more than two-and-a-half years ahead of schedule. That budget savings will enable the FAA to deploy Data Comm at even more airports.