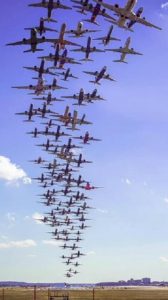 February 28 -The Federal Aviation Administration (FAA) will hold 11 public information workshops in April and May 2017 on proposed airspace improvements in the Denver Metro Area.

The improvements are part of the Denver Metroplex project, which proposes to use streamlined satellite navigation to move air traffic more safely and efficiently through the Metro Area. Existing air routes may be modified with new satellite-based routes.

Satellite technology enables the FAA to create more direct air routes as well as routes that are automatically separated from one another. It also enables the FAA to build highly efficient climbs and descents into departure and arrival routes, which has yielded significant environmental benefits in a number of locations throughout the country.

All of the upcoming workshops will occur in the evenings. The FAA is holding the workshops in an Open House format, so people can attend any time during the publicized time range to learn about the proposed improvements.

FAA representatives will provide information on the project and be available to answer questions, one-on-one. The preliminary route designs also will be displayed on poster boards and iPads.

Free parking, street parking, or paid parking will be available at all locations. The FAA will make Spanish interpreters available if city officials request them at least one week prior to the event.

The community feedback the FAA receives from these workshops will help the agency determine whether it should make changes to the preliminary designs before beginning the project’s draft Environmental Assessment (EA).

When the FAA completes the Draft EA, it will hold additional public workshops where people can review and comment on the proposed route designs analyzed in that document. These public workshops are expected to take place in 2018.

The workshops will be held on the following dates:

To learn more about the project, please visit: